Addressing the Labor Shortage Through Distributism

This is from a presentation that I gave recently at the St. Joseph’s Business Group at Our Lady of Mt. Carmel. This presentation summarizes the most recent strategic outlook of Intrinsic Research Company. Again, I owe much to our strategic partner, OG Rose.

What is the problem we are trying to solve? How do we harness the power of ideas that is latent in digital media? Imagine harnessing hydroelectric power from Niagara Falls, but you must use a bucket to catch the water. That is what our liberal institutions are trying to do; universities, arts and entertainment, government, technology companies, Wall St. finance. They harness the talents, skills, and abilities of a specific subset of people, yet they utterly fail to capture the full capacity of humanity’s ideas to effectively solve the problems that we all face. 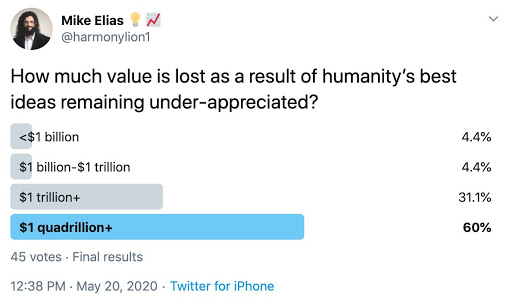 Created by IdeamarketView on OpenSea

This is through no fault of their own; these liberal institutions were not designed to handle digital media. What is their fault is that, when they fail, they become increasingly authoritarian.

What is the solution? Imagine harnessing all the hydroelectric power of Niagara Falls, and fully translating it into energy that people can use in homes or businesses or transport. That is the analogy for what an effective social network can do to harmonize people’s talents, skills, and abilities.

This is what the Universal Church has always done. It has always harmonized the talents, skills, and abilities of its members, so that they are compatible with one another in the most beautiful living community on earth, the Mystical Body of Christ. How does the Universal Church do this? Through Scripture, Tradition, the Mass, and through Catholic Social Teaching.

Catholic Social Teaching is the application of timeless Catholic wisdom to social and economic issues. It arose specifically to address the working conditions in the 19th century. It is the political economy of distributism, subsidiarity, and integralism. Some of its foundational ideas are in:

We will focus specifically on distributism here.

The conditions of workers in the 19th century are not that different from the conditions of workers today. Right now, we face a labor shortage and stagflation effects. Why is there is a labor shortage? Because without direct ownership of property and productive assets, like land, energy, machinery, raw materials, laborers have no incentive to productivity. They have no intrinsic motivation to work. They cannot see tangible fruits of their labor, cannot acquire ownership of property, cannot see the results of skillful mastery and craftsmanship. This is only possible through expanded ownership of productive assets or means of production, which provides an intrinsic motive and sense of social responsibility, above mere utility, subsistence, and extrinsic compulsion.

Again, how do we harness the full productive power of ideas in digital media?

Non-fungible objects (or NFTs) allow for ideas to be privately owned yet publicly shared. The digital economy is inherently distributist…!

Communities form around these digital objects, the social networks of the future. The digital art objects are exchanged on open markets. The use cases (so far) include: profile avatars, access to events, access to in-game features. One of the most prestigious digital art communities is CryptoPunks:

This is just one example of the kind of independent social networks that forms around digital art. There are thousands of these communities forming every day.

The legacy social network platforms, like Facebook, can claim to be value-neutral platforms, rather than publishers who have an editorial bias. Being founded on this premise of neutrality, they are unable to evaluate good ideas from bad ideas. Their primary function is to sell advertising, which is inherently propagandistic or sophistical. Thus, advertising-revenue model social networks are platforms that, by design, cannot facilitate truthful communication. They must incentivize intellectual hedonism, by design. And thus they inevitably produce a sociological race to the bottom that depreciates the common good. This is proven in the Intrinsic Value Thesis.

What is the solution? The solution is to start from the eternal values, and let software infrastructure for social networks emerge organically from those values. The starting point is Catholic Social Teaching, and specifically, distributism. These values can be effectively captured in digital objects and form communities.

How does IRC implement distributism? Intrinsic Research Company has a library of digital objects, focused on the foundations of applied economics in digital media. 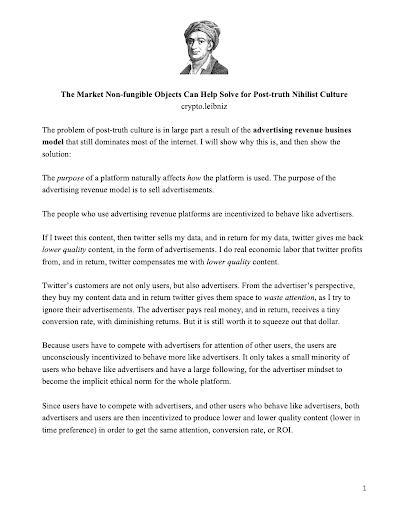 IRC has the most unique and innovative NFT model in the entire market. IRC allows for direct investment in restoration of prosperity. Ownership of IRC digital objects provides ownership of productive cultural assets:

1.) For any purchase of one of these digital objects, the money goes into the IRC treasury. The object can be sold back to the treasury at any time. Thus, it retains an intrinsic, risk-free value. The asset can only grow in value, and it cannot lose value. It has both economic and cultural intrinsic value.
2.) The object can be sold on a secondary market for a premium above its intrinsic value. This is commonly known as a P/E multiple, which represents the surplus of economic productivity.
3.) The digital object is as timeless as the interdependent network effects of the distributed ledger it is stored on, which is sustained by validator nodes distributed all over the world, that harness the seamless combination of natural energy resources (oil, natural gas, and renewables) and human cognitive energy resources. Thus, the digital object is a kind of proxy for investment in computational energy resources. And this investment can be a catalyst to incentivize the widespread use of renewable energy sources.
4.) Ownership of the digital object provides exclusive access to the IRC applied economics network, which allows people to profit from simple contribution of ideas to the network. Unlike legacy social networks, IRC pays people directly for their data instead of using it against them.

Now if laborers had access to these most productive cultural assets, digital networks of ideas, my hypothesis is that there would be significant gains in the intrinsic motivations to productive activity. Laborers would experience active participation in control of society’s productive assets, and thus have ownership and responsibility for social outcomes. This feeling of ownership would displace the feeling that their own outcomes and results of labor are beyond their control. This would resolve the declining incentives to labor, through revitalization of the social fabric of trust.

For your security, we need to re-authenticate you.